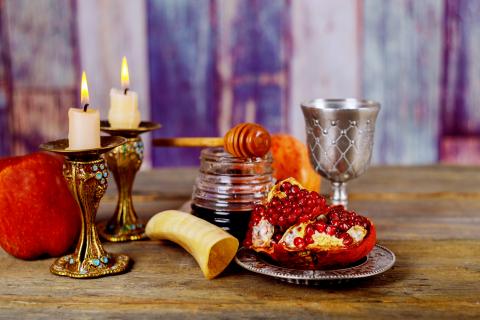 Rosh HaShanah (literally, “Head of the Year”) is the Jewish New Year, a time of prayer,  rejoicing and serious introspection.The holiday marks the beginning of a 10-day period, known as the Yamim Nora-im (“Days of Awe” or “High Holidays”), ushered in by Rosh HaShanah and culminating with Yom Kippur (the “Day of Atonement”)

During Rosh Hashanah, Jewish people ask God for forgiveness for the things we’ve done wrong during the past year. We also remind ourselves not to repeat these mistakes in the coming year. In this way, Rosh Hashanah is an opportunity to improve ourselves. It’s a holiday that helps us to become better people.

Jews from all over the world celebrate Rosh Hashanah in different ways. Holiday traditions can be different depending on where you’re from and how your family celebrates. A special prayer service is held at the synagogue. The shofar, a special instrument made from the horn of a kosher animal (usually a ram), is blown during the Rosh Hashanah service. Tzedakah, or giving charity to people in need, is also part of the holiday. Good deeds are done and charity is given in the hopes that God will seal our names in the “Book of Life,” which brings the promise of a happy year to come.

What kinds of foods are eaten on Rosh Hashanah?

Food is an important part of Rosh Hashanah. Many special foods are included in a traditional Rosh Hashanah meal as blessings. Sweet foods are eaten to symbolize our hope for a “sweet new year.” We enjoy “new fruit,” a fruit that has recently come into season but we have not yet had the opportunity to enjoy this year (often a pomegranate). The head of a fish is sometimes served, to remind us to be “like the head and not the tail”—so we’ll be leaders, not followers. The fish also symbolizes the translation of Rosh Hashanah, which means “Head of the Year” in Hebrew. A pretty, symbolic bread called challah is baked, sweetened with raisins and braided into a round shape. Apples are dipped in honey, again symbolizing sweetness. All of these traditions are important because they help to connect us to the deeper meaning of the Rosh Hashanah holiday.

The origins of Rosh Hashanah may be sought in a royal enthronement ritual from biblical times, though the Bible itself never mentions the “New Year” or “Day of Judgment” aspects of the holiday. Even though Rosh Hashanah falls in the seventh month, later rabbinic tradition decided to designate it the beginning of the year. Although the origin of this tradition may have been adopted from the Babylonians, the rabbis imbued it with Jewish significance as the anniversary of the day on which the world was created, or of the day on which humanity was created. Another explanation can be found in the significance of Tishrei as the seventh month, hence the Sabbath of the year.

Yom Kippur—the Day of Atonement—is considered the most important holiday in the Jewish faith. Falling in the month of Tishrei (September or October in the Gregorian calendar), it is sometimes referred to as the “Sabbath of Sabbaths.” For this reason, even Jews who do not observe other traditions refrain from work, which is forbidden during the holiday, and participate in religious services on Yom Kippur, causing synagogue attendance to soar. Some congregations rent out additional space to accommodate large numbers of worshippers.

According to tradition God judges all creatures during the 10 Days of Awe between Rosh Hashanah and Yom Kippur, deciding whether they will live or die in the coming year. Jewish law teaches that God inscribes the names of the righteous in the “book of life” and condemns the wicked to death on Rosh Hashanah; people who fall between the two categories have until Yom Kippur to perform “teshuvah,” or repentance. As a result, observant Jews consider Yom Kippur and the days leading up to it a time for prayer, good deeds, reflecting on past mistakes and making amends with others.The holiday is observed with a 25-hour fast and a special religious service.

The observations rise from the Torah commandments which states all Jewish adults (apart from the sick, the elderly and women who have just given birth) to abstain from eating and drinking between sundown on the evening before Yom Kippur and nightfall the next day. The fast is believed to cleanse the body and spirit, not to serve as a punishment. Religious Jews heed additional restrictions on bathing, washing, using cosmetics, wearing leather shoes and sexual relations. These prohibitions are intended to prevent worshippers from focusing on material possessions and superficial comforts.

Because the High Holy Day prayer services include special liturgical texts, songs and customs, rabbis and their congregations read from a special prayer book known as the machzor during both Yom Kippur and Rosh Hashanah. Five distinct prayer services take place on Yom Kippur, the first on the eve of the holiday and the last before sunset on the following day. One of the most important prayers specific to Yom Kippur describes the atonement ritual performed by high priests during ancient times. The blowing of the shofar—a trumpet made from a ram’s horn—is an essential and emblematic part of both High Holy Days. On Yom Kippur, a single long blast is sounded at the end of the final service to mark the conclusion of the fast.

History and Significance of Yom Kippur

According to tradition, the first Yom Kippur took place after the Israelites’ exodus from Egypt and arrival at Mount Sinai, where God gave Moses the Ten Commandments. Descending from the mountain, Moses caught his people worshipping a golden calf and shattered the sacred tablets in anger. Because the Israelites atoned for their idolatry, God forgave their sins and offered Moses a second set of tablets.

Jewish texts recount that during biblical times Yom Kippur was the only day on which the high priest could enter the inner sanctum of the Holy Temple in Jerusalem. There, he would perform a series of rituals and sprinkle blood from sacrificed animals on the Ark of the Covenant, which contained the Ten Commandments. Through this complex ceremony he made atonement and asked for God’s forgiveness on behalf of all the people of Israel. The tradition is said to have continued until the destruction of the Second Temple by the Romans in 70 A.D; it was then adapted into a service for rabbis and their congregations in individual synagogues.

Sukkot (Feast of Booths or Tabernacles) is one of the three biblically based pilgrimage holidays known as the shalosh regalim. It is an agricultural festival that originally was considered a thanksgiving for the fruit harvest. Sukkot are hut-like structures that the Jews lived in during the 40 years of travel through the wilderness after the exodus from Egypt. As a temporary dwelling, the sukkah also represents the fact that all existence is fragile, and therefore Sukkot is a time to appreciate the shelter of our homes and our bodies.

How is Sukkot celebrated?

Sukkot is celebrated by, first of all, building a sukkah. Jews are required to eat in the sukkah for eight days (seven days in Israel), and some even sleep in the sukkah for the duration of the holiday. The sukkah is decorated and the first day is considered a holy day in which most forms of work are forbidden. The rabbis dictated that arbat ha’minim (four species) should be held together and waved during the holiday. These are based on four plants mentioned in the Bible, and the rabbinic version includes the following: etrog (fruit of the citron tree), lulav (palm frond), hadas (leaves from the myrtle tree), and aravah (leaves from the willow tree). This waving ceremony was performed at the Temple in the ancient world.

The seventh day of Sukkot is called Hoshanah Rabah. On that day in the synagogue Jews circle the room seven times while the arbat ha’minim are held and special prayers are recited.

What kinds of foods are eaten on Sukkot?

There are no traditional Sukkot foods, except for kreplach (stuffed dumplings). Sukkot meal inspiration can come from the harvest origin of the holiday, and meals can include fresh fruits and vegetables, or other harvest-related ingredients. Of course, challah, chicken soup, and kugels are traditional Jewish foods that can be served on Sukkot (or any time of the year).